Share a memory
Obituary & Services
Tribute Wall
Read more about the life story of Janet and share your memory.

Janet L. Theve, age 70, passed away in Mystic CT after a recurrence of Triple Negative Breast Cancer.  She was preceded in death by her brother Richard L. Olson of Troy, NY and her brother-in-law Christopher Neiley of Rome, NY.  She is survived by her husband Cliff Theve, the love of her life for forty-three years, and her sisters Suzanne (Gene) Schultz, East Greenbush, NY and Nancy Neiley, Rome, NY, and numerous nieces and nephews and great nieces and nephews.

Janet was born in Binghamton, NY on April 18, 1952. After attending college, she went on to pursue two challenging and exciting careers.  She studied Middle Eastern dance for eight years and became an accomplished belly dancer.  She formed her own dance business under the name Talila and designed her own costumes and veils by hand, meticulously sewing on sequins and beads on beautiful fabrics.  She traveled to Egypt and brought back a costume once worn by a famous Egyptian dancer.  She was popular in the Middle Eastern restaurants of the greater Boston area.

Janet pursued a career in aviation, obtaining an ATP rating, multi engine rating and seaplane rating.  She flew for New England Airlines, ran a flight school at RH Hammer Aviation in Norwood, MA, and was a certified FAA flight examiner.  She also worked at Block Island Airport for two years.

Janet and her husband Cliff, who was also a pilot, owned a single engine plane and enjoyed flying to Cape Cod and to Block Island for the day.  They took relatives young and old alike on rides and flew to exciting destinations such as Key West.  A most exciting adventure was flying a twin engine plane to the Bahamas.  Her adventures continued when she skydived over Block Island.

The family wishes to thank all the caring staff at Masonicare Norwich and Hospice. A memorial service will be held on Block Island when her tulips bloom in the spring.

To send flowers to the family or plant a tree in memory of Janet L. (Olson) Theve, please visit our floral store. 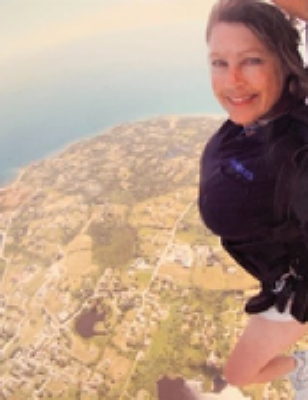 Look inside to read what others
have shared
Family and friends are coming together online to create a special keepsake. Every memory left on the online obituary will be automatically included in the book.

Family and friends are coming together online to create a special keepsake. Every memory left on the online obituary will be automatically included in the book.